Grounding on data the planning and monitoring of European environmental activities is an important issue for the construction of Europe. Reusing geo-data already produced by members to monitor activities at the level of the country or region in order to perform monitoring and planning at the global level of Europe is a different but related issue. It is a strategy to achieve more consistency and trust between the different levels where environmental activities and policies are monitored. This strategy has led the European Commission to issue the INSPIRE directive–Infrastructure for Spatial Information in Europe- ; national public authorities should make their data reusable for Europe [European Parliament 2007][Video 1]. Reusing at the level of Europe national data is not straight forward. Even though we share a common European physical territory, especially in the domain of environment where many phenomena do not stop at borders, each country has its own specific way to design data about ground water, transport networks, population, land-use and air temperature. The European digital territory also has its boundaries.

The ‘INSPIRE extensions’ workshop was organized to foster exchanges between organizations in charge of implementing INSPIRE, with a focus on the topic of extending INSPIRE Data Specifications, to share their experiences, improve each one’s knowledge and also the scalability of local initiatives. It was co-organised by EuroGeographics Knowledge Exchange Network on INSPIRE (aka KEN INSPIRE), EuroSDR Commission 4 (focused on information usage) and Geonovum, a public organization who is coordinating the Dutch National Spatial Data Infrastructure (NSDI) supported by the Dutch Cadaster and the Geological Survey of the Netherlands.

Complementary to the minutes dedicated to the KEN INSPIRE community, this report wishes to be more pedagogic to reach out an audience –scientists or developers- who may not be familiar enough with INSPIRE issues and problems but could find INSPIRE as a possible application domain for its scientific or technological field and, in the future, be willing to contribute to the progress of INSPIRE.

The two first sections summarise the motivation of INSPIRE and the reasons for designing INSPIRE Data Extensions. The section after presents approaches adopted by practitioners: inheritance on the one hand and adaptation on the other. The subsequent sections tackle issues related to INSPIRE implementation in general and not limited to Data extension.

All presentations of the workshop together with the minutes are available on the workshop website: https://eurogeographics.org/calendar-event/workshop-on-inspire-extension-june-2017/ 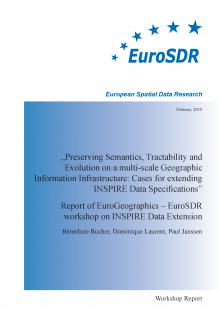