This report includes the proceedings of the third EuroSDR workshop on Crowdsourcing in National Mapping and contains seven abstracts of related presentations given during this event. This workshop entitled “VGI Map of Europe: The State of Play” took place in Leuven, on 16 (Full) and 17 (Half a day) January 2020. 23 professionals and researchers from National Mapping and Cadastral Agencies and universities participated the workshop.

In the past number of years, use of crowdsourcing by National Mapping and Cadastral Agencies (NMCAs) has grown from being a disruptive technological idea to a mainstream source of geographic data and information. Today, many NMCAs and companies within the geospatial technologies industry use crowdsourcing to update databases and registries. However, it is often difficult to find information about what projects or initiatives are currently in operation or have been used in the past. Where has crowdsourcing being used? What role did crowdsourcing play in collecting, editing or updating data and information for NMCAs, companies or other institutions? In this context, submissions were welcomed from participants who were willing to share their experiences, knowledge, expectations, use cases, future planning, etc., for Volunteered Geo Information (VGI) and crowdsourced geospatial data.

- Create VGI-ME (the VGI Map of Europe). We gathered information and examples on projects and initiatives in European National Mapping and Cadastral Agencies and geospatial companies/SMEs where crowdsourcing has been successfully implemented. VGI-ME will be a conceptual ‘map’ of projects from around Europe which used crowdsourcing as a means of collecting geospatial data and information.

- Plan the design and delivery of a VGI Hackathon event in the second half of 2020 which will feature the creation of new crowdsourcing applications (mobile and web) and extending/improving existing ones. For this part of the workshop we actively encouraged the participation of developers from NMCAs, universities, research institutions and companies who were/are active in developing crowdsourcing applications. We invited them to present their software, the data produced with it and its use in the organization’s workflow and discuss extensions/new ideas which can be developed as proof of concept in a hackathon with other developers and creative thinkers, in order to make VGI apps more versatile, more user-friendly, and more effective.

The workshop engaged with stakeholders from NMCAs, the Geomatics Industry, academic research, software developers, citizens involved in geographic crowdsourcing and VGI, leaders or managers of crowdsourcing or VGI projects over 1.5 days to understand the most prominent and pressing questions related to crowdsourcing and national mapping in Europe (and beyond) today and to begin building the inventory of projects for VGI-ME.

The main conclusions of this workshop were that the research topic Crowdsourcing/VGI covers multiple disciplinary areas such as geomatics, computer science, law, ethics and governance. NMCAs are currently under pressure to consider/use crowdsourced data in their production flows, a possible divergence between research community and NMCAs on future VGI focus. More attention is needed for state of the art examples of the use of crowdsourcing at NMCAs and the legal and ethical issues involved in deploying them. 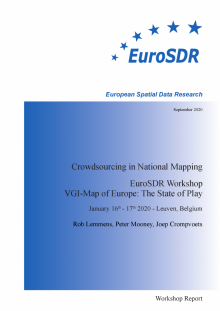